About Us & Other Info 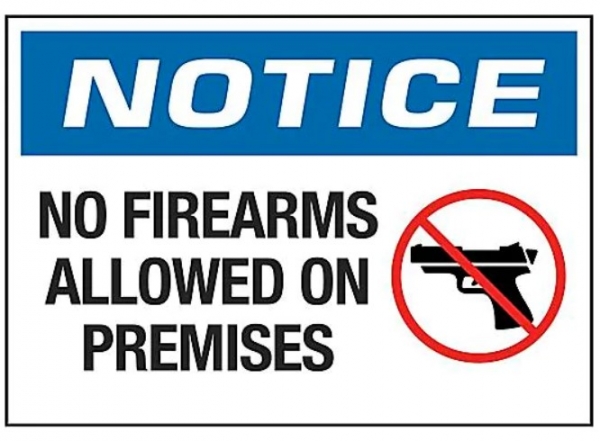 AB 286 Puts the Public More At Risk Then It Does to Protect It. Nevada Legislators Fail to Consider, or At the Very Least Mention, the Negative Sides of Such a Bill.

While the bill covers a couple different things, we are going to be focusing on just one part in this article. Read the Bill text here: https://www.leg.state.nv.us/App/NELIS/REL/81st2021/Bill/7778/Text

On the face of it, like most gun control-related bills, it would seem to the unsuspecting public that a bill like AB 286 is made to protect the public and businesses against acts of VIOLENCE but in all reality the bill really puts the public more at risk then it does to protect them.

In general AB 286 would allow businesses to post 'No Firearms Allowed' signs which would hold they weight of law and that anyone who does not head the signs would be guilty of, at a minimum, a misdemeanor. Yes, even if you are a legally licensed Carrying Concealed Weapons (CCW) permit holder.

In current law, even if business posts a 'No Firearms Allowed' sign, a firearm owner could still carry a firearm without fear of arrest unless said business owner was somehow made aware that a person had a firearm (usually through visual detection) at which point they could then ask the firearm holder to leave or secure their firearm in their vehicle. After that, if the firearm owner refused to comply, then and only then, they could trespass the firearm owner and have them potentially arrested for trespassing.

The bill fails to consider a couple of factors:

1) If a law-abiding firearms owner (or even take it a step further, a law-abiding citizen who has their concealed firearms permit) would like to visit a business that has a 'No Firearms Allowed' sign posted and that business will not give permission to said patron to carry their firearm on the premises, the patron would have no choice but to leave their firearm in their vehicle and thus leaving that firearm no longer within their physical control.

This opens the firearm up to be stolen out of the vehicle. Sure, the law-abiding firearm owner could purchase a safe and keep the safe in the vehicle but even then, the safe could still be stolen or possibly broken into or the vehicle itself could just be outright stolen with the safe and firearm inside... Now, at no fault to the law-abiding firearm owner, that firearm could (and most likely will) fall into the wrong hands or the hands of a prohibited person who will most likely use that firearm in the commission of a crime or murder.

But you can just visit another business you say? Sure, there is that but let us say for example all local grocery and convenience stores all have signs posted prohibiting firearms on their premises? So now, in essence, if I want to shop for essential items like food and toiletries, I have no choice but to disarm and leave my firearm in my vehicle where, once again, the firearm is no longer under my physical control and at risk of being stolen and landing in the wrong hands.

2) Possible liability for business owners? I am no lawyer, and I am not sure of any such cases, but this could possibly open up businesses who do not allow firearms to be carried on premises to potential lawsuits. What do I mean?

I for one would strongly consider a possible lawsuit against a business should they prevent me, a law-abiding and licensed CCW permit holder, from exercising my 2nd Amendment right to bear arms for self-protection should, while I am on their premises, become a victim of violence. In theory, in a case like this, by forcing me to disarm they:

The current law works and should be kept as is.

While AB 286 as a whole should be shot down, at the very least a provision should be put in that exempts current legal CCW holders from the law.

Gun-owners and non-gun owners alike, regardless of political affiliation, need to contact their Nevada Legislative Representatives NOW and tell them to oppose this bill for the very reasons (at the very minimum) I have stated above.

Register, Attend and Testify at the Virtual Hearing to OPPOSE AB 286 https://www.leg.state.nv.us/App/NELIS/REL/81st2021/Bill/7778/Meetings

Find and Email Your Representative https://nvlcb.maps.arcgis.com/apps/webappviewer/index.html?id=9c2cd4575624417fa56fd084a7ee4dd9

Oldest First
Newest First
There are no comments posted here yet
Read 332 times Last modified on Tuesday, 16 March 2021 13:18
Published in Articles
Tagged under

More in this category: « Firearms Community and Industry Professionals: A Serious Conversation Should Be Had Everyone, Not Just Gun Owners, Needs to Oppose AB 286 Today! The Time to Act is Now! »
back to top