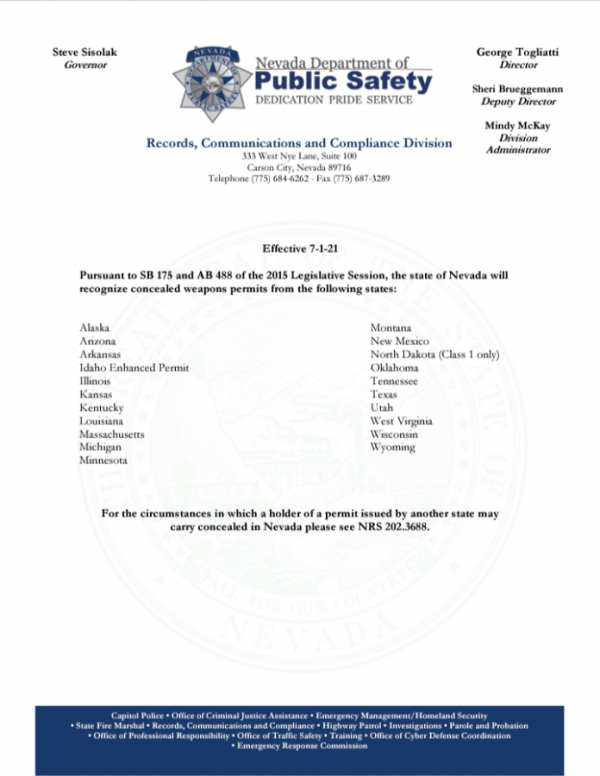 The Nevada Department of Public Safety Recently Updated The List of States in Which Nevada Will Recognize CCW Permits From. Absent from that letter was a reason why some states were removed. We reached out for information as to why some states where removed and got a response back.

In response to our request for information, Tara Olson, one of Nevada's Point of Contact Program Officers, responded back to our request with the following statement:

It should be noted that Nevada does still recognize Utah's CCW permits, they just don't recognize their provisional permits which are for Utah residents that are ages 18 to 20.

The States to which Nevada Recognizes their CCW Permits are:

Pursuant to SB 175 and AB 488 of the 2015 Legislative Session, the state of Nevada will recognize concealed weapons permits from the following states:

For the circumstances in which a holder of a permit issued by another state may carry concealed in Nevada please see NRS 202.3689.

Oldest First
Newest First
There are no comments posted here yet
Read 332 times Last modified on Friday, 18 June 2021 09:23
Published in News
Tagged under

More in this category: « BLM Provides Update on Sloan Shooting Area Polymer80 takes Governor Sisolak of Nevada to Court »
back to top