More Details Released on Shooting Outside The Range 702 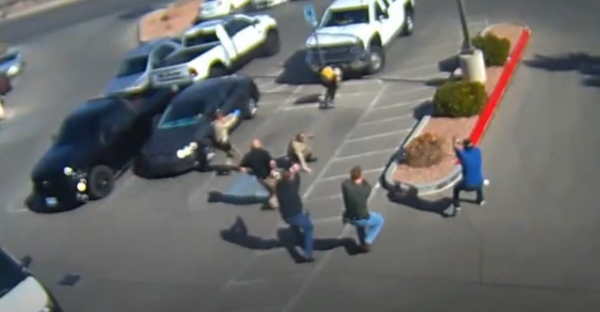 During a follow-up media briefing from the officer involved shooting at the Range 702 we learned of more detailed information on events leading up to the shooting. Media briefing with surveillance footage of incident included...

Follow-up To: Officer Involved Shooting Outside The Range 702

According to LVMPD Assistant Sheriff Brett Zimmerman during the media briefing, the suspect, identified as 27 year old Marvon Payton Jr., had a number of incidents of violence against a protect person (Law Enforcement) in the past.

On the day of the incident, Wednesday February 3rd, 2021, a person later identified as Mr. Payton was caught rummaging through a bag in the CCW Classroom of The Range 702. The bag had been left unattended by the owner during a break of one of The Range 702’s CCW classes.

According to AS Zimmerman the bag did contain a firearm but Mr. Payton was caught by the bags owner before he could get a hold of it.

The bystanders involved in the shooting were identified as Employees of The Range 702 but they were not personally identified by name.

It was revealed during questioning that 14 rounds were removed the deceased suspect and that the injured officer's partner had fired 9 rounds.

AS Zimmerman was not aware at the time of briefing on how many rounds were fired by the employees but it is apparent from his statements that several of the employees rounds did strike the suspect.

They were not immediately aware of which/whose rounds were fatal and that it may not be able to be determined but more may be known after the coroner's investigation.

The briefing included surveillance video from the classroom as well as from the parking lot during the shooting.

The briefing video is provided below and the surveillance video footage starts at 5:29.

The media seemed to ask a couple of questions on the involvement of the civilians in the shooting. AS Zimmerman was adamant that the store employees were helpful and that they assisted in not only saving the life of the injured officer but possibly that of the other officer as well.

He stated that while they do not encourage 3rd party civilan involvement during law enforcement interactions, there are numerous times that civilians have come to the assistance of officers and at times have made a big difference when the outcomes could have been worst for the officers had they not stepped in to help and they are more than grateful when that happens.

When questioned on any possible charges against the employees he said he was not aware of any as of yet and that from what he can see from the video is that they responded in a manner very similar to the officer during a violent and possible fatal attack on the other officer and he doesn't forsee the DA filing an charges against them but that the DA will ultimately make that decision after the initial investigation and determination of the officer's actions.

Oldest First
Newest First
There are no comments posted here yet
Read 163 times Last modified on Monday, 08 February 2021 22:52
Published in News
Tagged under

More in this category: « Officer Involved Shooting Outside The Range 702 LVMPD To No Longer Accept Walk-in CCW Applications »
back to top