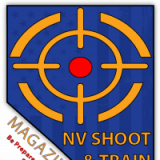 In mid 2019 our founder had a vision and began laying the foundation for what you see today.

The Nevada Shooting Sports & Firearms Training Network is the brainchild of Brian Bartolome, a 42 year old (August 2019) Semi-Native Las Vegan/Nevadan. While actually Born in So. Cal his parents moved here when he was just a couple of months old (Thank God!).

Though his family wasn't firearms fanatics they did own an old Sears Roebuck 20ga shotgun and 22lr. His father would finally introduce him to those firearms at age 12 in the early 90's when he also bought him his first Ruger 10/22 (all of which he still owns to this day!).

He would enjoy that rifle only for a couple of years when adolescence got in the way and he turned his sights to cars, girls and other things boys in their teens find interest in. For the longest time he would find himself buying into the liberal logic on firearms and never saw the true appreciation and joy that firearms could really bring... something he would later regret.

From there he would focus on Automotive Technology which he applied to several jobs as an older teen into his early 20's. He would then move-on to Vegas' #1 industry and start working Security at local casino properties TI and the Mirage in the early late 90's and early 2000's. From there he would hire on to the Las Vegas Metropolitan Police Department as a civilian employee in 2001 and, where as of 2019, he is still employed.

In 1995 at the young age 18 he married his love of his life and they would over the next two years to a handsome son and beautiful daughter. He would later go on to start coaching his kids football teams for several years which would later lead him to see the need of a more central and local information system on youth sports was needed.

During this time, and during a short stint in Nightlife Promotions, he would start to learn the basics of web development and would apply this to creating a couple of local centralized informational websites, one of which he would later convert into a local non-profit organization he and his wife would found in 2012 called the LV Sportz Foundation... where he still serves as Board Chair and Executive Director in 2019.

Then thankfully in the beginning of 2017, seeing a need to keep his family safe, he would rekindled his Love with Firearms and would start to come across the fun and joy that are attached to them.

Later in 2018 while looking for training to hone his skills for Self-Defense reasons he became intrigued by various local shooting matches he came across. While not a very serious competitor, he found the skills attached to some of these matches as a supplement to just going out for "Target Practice" and seamingly found joy in the local semi-competitive events just for the fun and skill building aspects of them.

Taking all of his previous experiences and joys he would drum up the idea for a centralized informational source just for Nevada for those well-established and those new to firearms and its related activites such as shooting for fun and sport as well as for training for things such as: safe usage and handling; self-defense; for participation in shooting sports.

What drives this is the hope of keeping the state 2A friendly by making it easier for people throughout the state to become aware of the various opportunities out there to become knowledgeable on the safe use and handling of firearms; to help provide them way to find their first opportunity to experience shooting; and to keep them, and those already established as firearms owners, engaged in training and activity not just for self-defense but for fun as well;

He wanted to do this with emphasis on creating not just an informational portal but a social community as well, open to everyone both new and established, with the goal of growing the love of firearms and shooting sports. To take it a step further, he wanted to par that with his experience in and love for the local non-profit sector to give back to State focused community and youth oriented organizations with similar aspirations.

Welcome and Thanks for Visiting NV Shoot & Train!
Be Prepared, Be Informed, Get Trained, Stay Trained, Have Fun!

We Are Your One Stop Source for EVERYTHING firearms related in Nevada! From Leagues and Competitions to Self-Defense and Other Firearms Related Training! We are pleased and excited to bring this unique community driven resource to all of Nevada (and even the surrounding areas)!

To help accomplish this, we have created this site where you can find information on just about anything related to Shooting and Firearms in Nevada.

On Our Site You Will Find:

We offer a full directory and events calendar that is at your disposal! We also offer several ways that you can make NVST For You! Getting Started Is Easy! To Learn More: GO HERE NOW!