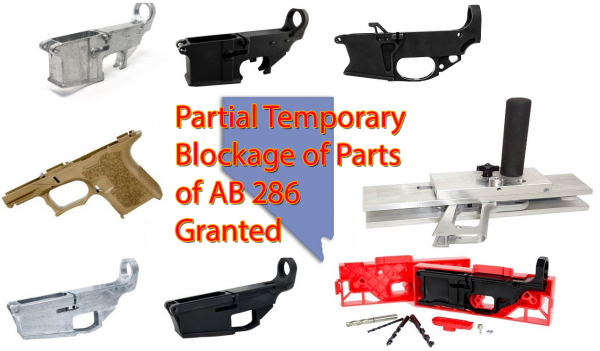 In June, following the enactment of AB 286, Polymer80 took emergency action to stop the enforcement of the new law by challenging its constitutionality.  To this end, Polymer80 initially filed a Verified Complaint coupled with an emergency application for an Order to Show Cause and related motion for a Temporary Restraining Order and Preliminary Injunction to bar enforcement of this new and seriously defective enactment.  Polymer80 was forced to take this extraordinary action because, among many other reasons, AB 286, a hastily and poorly written and passed bill, purports to curtail and criminalize products that are legal to own under federal law.  And, it does so through vague, unintelligible, and sweeping restrictions.  At its core, AB 286 strips lawful citizens of Nevada of their basic, constitutionally protected rights and targets corporations, such as Polymer80, for lawful activities that greatly contribute to the Nevada economy and facilitate and safeguard the rights of Nevadans.

On July 16, 2021, Judge John P. Schlegelmilch entered a Preliminary Injunction barring the enforcement of Sections 3.5 and 6.9 of AB 286.  In particular, Judge Schlegelmilch held that Polymer80 “has demonstrated a likelihood of success on the merits of its claims because AB 286 – a criminal statute that under Nevada law requires a heightened level of scrutiny — and particularly AB 286’s definition of ‘Unfinished Frame or Receiver’ is impermissibly vague.”  Judge Schlegelmilch also held “that AB 286 fails to provide a person of ordinary intelligence fair notice of what AB 286 criminalizes and encourages discriminatory, criminal enforcement because the definition of ‘Unfinished Frame or Receiver’ in Section 6.9 of AB 286 is inherently vague.”

“This is a significant victory for Polymer80, Nevadans, and our customers nationwide,” said David Borges CEO of Polymer80. “AB 286 is a vague and unlawful legislation that targets our company specifically for conducting a lawful business.  We will continue to challenge lawless attempts to curtail our rights and the rights of our customers.”

To learn more about Polymer80, please visit their website at www.polymer80.com