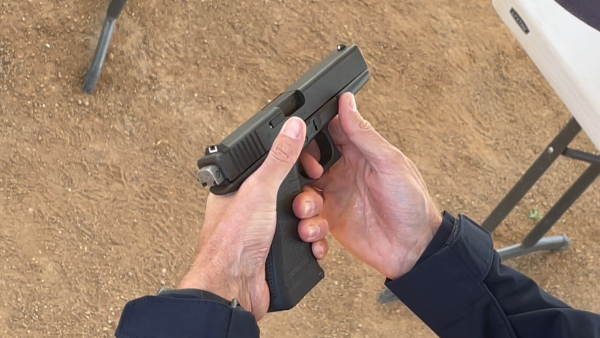 A Las Vegas man made his initial appearance in federal court yesterday for allegedly possessing a machine gun, and for allegedly engaging in the manufacturing and selling of privately made firearms, including machine gun conversion devices commonly referred to as “Glock Switches” — which are designed to convert semi-automatic pistols to fire automatically — without a Federal Firearms License (FFL).

According to a press release by the BATF's San Francisco Field Office, Clarence Meekins (36) is charged with one count of illegal possession of a machine gun and one count of engaging in the business of dealing and manufacturing firearms without a license. A preliminary hearing has been scheduled for May 17, 2022, before U.S. Magistrate Judge Daniel J. Albregts.

According to allegations in the complaint, between March 23 and April 11, 2022, Meekins sold privately made 3-D printed firearms and Glock Switches. On April 28, 2022, law enforcement executed search warrants on Meekins’ vehicle and residence. During the searches, law enforcement seized a rifle, a shotgun, a .38 revolver, 3-D printers, machine gun conversion devices, 3-D pistol frames, and various magazines and ammunition. Meekins does not have an FFL, which is required to engage in the business of dealing or manufacturing firearms.

Meekins has prior felony convictions in Nassau County, New York, including possession of a controlled substance, Hobbs Act robbery, and brandishing a firearm during a crime of violence. Accordingly, federal law prohibits him from possessing firearms or ammunition.

Acting U.S. Attorney Christopher Chiou for the District of Nevada and Special Agent in Charge Patrick Gorman for the Bureau of Alcohol, Tobacco, Firearms and Explosives (ATF) made the announcement.

This case was investigated by the ATF. Assistant U.S. Attorney Allison Reese is prosecuting the case.

A complaint is merely an allegation, and every defendant is presumed innocent until proven guilty beyond a reasonable doubt in a court of law.

More in this category: « Homeland Personal Protection Launches Certified Instructor Program Nevada to Divest from Companies That Manufacture or Sell "Assault Weapons" »
back to top